I did more oil than last time, about five or six palm fulls. I then (stupidly) decided I would wash it out in a bath instead of taking a shower, yuck! I will never make that mistake again! I felt sooo oily! Even after shampooing twice with the stuff I am currently using, Aubrey’s natural honeysuckle rose moisturizer shampoo, and conditioning with the same type of conditioner it still felt gross. I then plopped for probably about 30 to 45 min.

I feel like there is still a lot of oil up there so I will probably have to shower a few more times before it is all out. It looks and feels really gross! I think next time I will just put in one palm full or less. Or I might try olive oil as an anti-frizz agent instead of a DT now that I am not using the “bad” aloe for that. The tips of my hair did not seem to get all oily with it so I could also try putting it in only at the tips.

Here are some pictures of my oil mess: 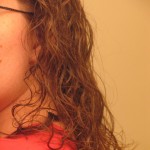 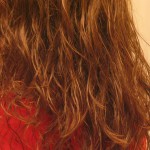 Share/Bookmark
This entry was posted in Hair Stuff, Other Stuff and tagged Hair, Oil. Bookmark the permalink.